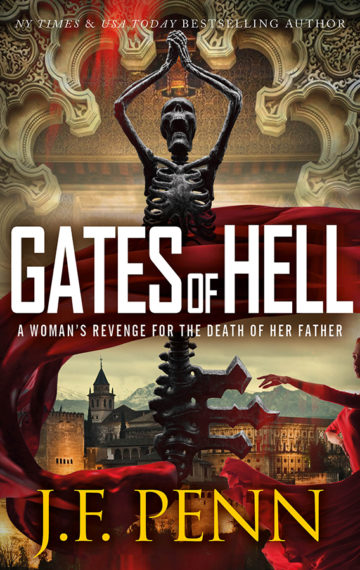 For millennia, they have held the gates of Hell shut against the darkness. But now they’re gone… and the gates are swinging wide.

When Morgan Sierra receives a package with a note from her father — murdered in a suicide bombing years ago — she goes on high alert. As an agent of ARKANE, the secret organization tasked with investigating the supernatural, Morgan has seen unusual things like this before.
But even she isn’t prepared to face the danger that’s coming… from her own past.

Her father’s death was no accident. A member of the Remnant — a group of holy men schooled in the deepest mysteries of Kabbalah — her father was one of those charged with protecting our world from the demons that want to take it; to keep sealed the gates of Hell.

But the Remnant is dying, its members murdered by Adam Kadmon: a man once groomed to lead the Remnant before turning to twisted paths of power. Kadmon wants to open the portal between our world and Hell, to create a twisted, demonic version of our world over which he will reign supreme.

Now, Morgan and her partner — Jake Timber, the enigmatic agent who recruited her for ARKANE — are on the run. From the holiest cities in Israel to underwater cities lost to history, they must follow this trail to the end. To find a way to stop Kadmon before he offers the final sacrifice. A sacrifice of pain. A sacrifice of blood. A sacrifice of one of the children of the Remnant.

Kadmon intends to spill the blood of Morgan Sierra… and open wide the Gates of Hell.

Gates of Hell is the sixth installment in the bestselling ARKANE series by New York Times and USA Today bestselling author J.F. Penn. Read as part of the series, or as a standalone adventure — either way, grab your copy fast, and join Morgan and Jake on their journey through the ARKANE!

“JF Penn writes like she has the hordes of Hades after her. Fast-paced, smart, and so much fun.” – Simon Toyne, bestselling author of the Sanctus trilogy

“The more I read of J.F. Penn’s books in her ARKANE series, the more I’m loving them. She’s so incredibly good at mixing history, religion, psychology, suspense, and action in the midst of her well described settings that I know I’ll be back for more. What an amazing imagination she has, combined with her gift for storytelling!” – Marcia K.

“Once you start this book, you will need to sit and finish it. It grabs you from the very start and doesn’t let go until you finish. Ms. Penn has again given her readers (and listeners too if on audible), a fascinating story worthy of her writing skills.” – Betsy

“Only Morgan Sierra (as nimbly written by Ms. Penn) could make battling demons, scuba diving in the Dead Sea, and dodging missiles look like a ride I want to go on. All in all, it is a fun, smash-em-up, edge-of-your seat thriller that will make life more enjoyable whether read all in one go (try and stop yourself) or in bits as you can sneak it in around pesky things like child-rearing and wage-earning.” – Christine Myers

“Penn takes religious symbology, myth and factual history to weave a story of intrigue, action and suspense that captivates and excites.” – Donna Young

“Penn has a talent for weaving real historical and religious threads with tightly spun fiction to make a totally believable narrative. Penn always does impeccable research into the settings of her stories as well, and that is again on display as she paints vivid pictures of the land and cityscapes that her heroine finds herself in.” – Robert P. Billeaud

“Joanna’s attention to detail and her research into history and religion is impeccable. Once again a brilliant read.” – N. Gambles

“Another brilliant book by this talented author. Great continuity and fast paced action from cover to cover.” – Robert Anastasiades

“Every time I think there’s no way J.F. Penn can outdo herself, she does.” – John K.

Goodreads reviews for Gates of Hell